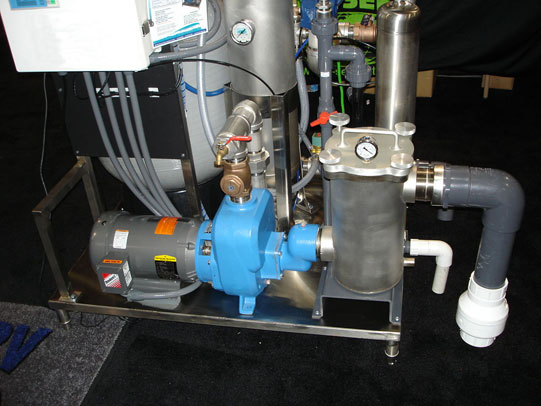 Think Sportsters and Buell. These bikes need to run in all weather. Because Harley is known for quality and performance they test the bikes thoroughly. One of the tests is a water test. Here the bikes are run in a wash bay with medium and high pressure water shooting at them from all sides. The bikes are tested and the water is sent down the drain. Try to imagine a seventy gallon per minute wash running all day and every day that the plant is operating. That’s a lot of water but to the accountants, it became a fixed cost.

Like most factories, they have a discharge permit that allows them to pump a fixed number of gallons to sewer every month. When they had a boom month and ran lots of bikes through, they could end up going over their allotment and that could mean a hefty fine. Again, fines can become another cost of doing business; high water and sewer bills can became another line item on the budget. Yet here again sense–or I should say dollars and cents–prevailed and they starting capturing the used water and re-using it. Now these were new bikes so there was very little dirt, oil or grease and the water coming from the wash bay was fairly clean compared to a regular carwash. Harley’s wash bay intercepts the water pumping into above ground tanks where it is treated with ozone, filtered and sent out again to test the next run of bikes.

Would anyone at Harley comment on how much they were spending? No. But they do seem to have more money for the poker runs.